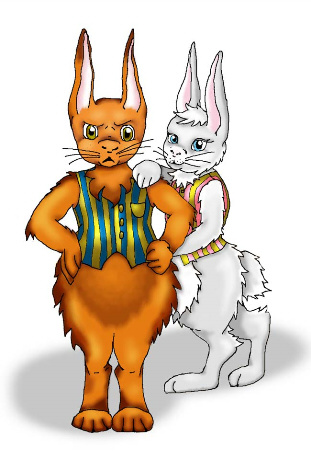 Bernadette Cashel-Smith lives in the Adelaide suburbs. She loves reading books and watching movies with her 2 beautiful girls.

One Easter, not that long ago, her daughters began asking zillions of questions about Easter Bunny;

“Does he have children?”

“Father Christmas has a sleigh and reindeer to help him out, so how does Easter Bunny deliver all those eggs?” And then the trickiest one, ‘How does he get inside all the houses?’ A spark flashed in Bernadette’s brain and she replied, “You know girls, you’ve given me an idea!”

She eagerly pointed out, “There isn’t much known about Easter Bunny, is there? It’s all very secretive… So guess what? I’ll write a story to answer your questions. I’m sure Easter Bunny won’t mind, if I tell his tale.”

This is how ‘Is The Secret Safe?’ came to life.

Now for Easter Bunny’s sake and for all the bunnies everywhere you must promise to keep, their magical world you discover, a secret! Ssh…!

Bernadette’s 2 cats and Dalmatian puppy keep life very, very busy. When she can, she enjoys gardening and hopes one day to catch a glimpse of the elusive Easter Bunny!

She has studied film and theatre at Flinders University and the Drama Centre London. She has made a film titled, ‘The Ghost Detective’ and collaborated in the play ‘Ring The Bell Softly, There’s Crepe On The Door’, which won an Advertiser’s Critic Award at the Adelaide Fringe Festival.

Bernadette has mainly worked in the retail and financial industries before becoming a fulltime Mum and Writer.